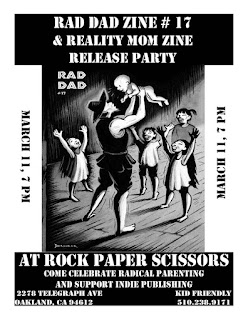 i am excited to announce on the eve of the bay area anarchist bookfair
weekend, rad dad will have a release party in conjunction with corbin
lewars' release of creating a life and her long running zine reality
mom as well as the release of the new issue of mamaphiles...

2. on saturday and sunday march 13-14 the 10th annual bay area anarchist bookfair will be kick ass with so many radical mama and papa events so look out. there will be two panels and several parenting writers having events around the bay...

3. on sunday march 14th at 5pm at the green arcade in solidarity with my baby rides the short bus and the daddy shift, a bunch of parents will give brief readings...come on by...
Posted by tomas, editor rad dad zine at 8:17 AM 2 comments:

Ten reasons why I both love and hate cell phones 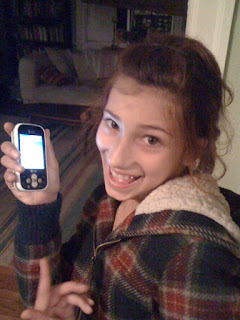 Or, yes dad I know, no sexting!

If you saw me now with my iphone, warm against my left butt cheek like a lover’s palm, the last thing I see before bed, the first thing I stroke in the morning, you wouldn’t believe that less than two years ago, I had never even owned a cell phone. I was (and to be honest still am) a Luddite in theory though in practice I struggle. It’s become even more of a struggle now as each one of my three kids has a cell phone. Sometimes I wonder what the hell happened to me. But in an effort to understand more critically my love/hate relationship with the cell phone, I explored these ten scenarios.

SUANT p: \sue –ant\: Lying on the couch, my daughter and I were watching a movie and every couple minutes I observed the dexterity with which she would do her nifty wonder-woman like phone flip, nimble fingers texting faster than I could LOL and then slip the phone back in to her lap.
What the hell’s going on? I barked, that’s so irritating.
Dad, it’s a SUANT night.
What?
SUANT, she declared as if I should know exactly what the hell she was talking about, Stay Up All Night Texting. Me and my friends are doing it.
Are you serious? I asked.
My daughter’s response: the perfect eye roll, and then, as if to accentuate the point, her phone buzzed.
Flip.
Text.
Flip.
Yes, dad, I am.
Now recently, my kids have been very interested in reading everything I write for rad dad for “clarity and honesty” they intone, like editors from hell. So after this exchange I told My Youngest that I was working on an essay about cell phones and said, you know this has gotta go in that essay.
Whatever.
And, I added, I gotta text your mom about this, grabbing my own phone which conveniently is always within arm’s reach.
You text? My Youngest declared horrified as if she’d just seen me naked.
Ah, yeah.
Stop acting twenty, Dad. You’re forty.
Somehow every conversation ends with this statement
Addendum: a few weeks later when I read what I wrote to her, she laughed and smiled but confessed, well, we really only ever stay up to twelve texting.

Random text messages that continue conversations or more particularly arguments from days earlier. I’m in my office one morning. And in comes a text from My Youngest; she’s had the phone for only a month, so each text is the cutest thing in the world: an ‘I love you, dad’ here, an ‘I miss u’ there, perhaps even a random ‘hey dad, whats happenin.’ So I open the text and discover nothing of the sort, but instead find a final point in a week long discussion we’ve had about shaving her legs since she’s eleven. ‘what about that smooth away stuff - it’s not a razor and it’s not a chemical!!!’ We initially agreed that we’d consider it after the holidays. This, of course, was unacceptable to her. So her strategy: intimidating and/or pleading texts sent sporadically at various times of the day and night to pressure me in to caving. She’s trying to wear me down, I know. I text back, ‘how ‘bout we just wait until your legs are as hairy as mine and then you can decide if you want to.’
Ah, the textual silence that follows.

I love photos. I own two manual cameras, a Polaroid and a stash of Polaroid film. However, there is something cheesy and immediate about cell phone images, the pixilated quality, the surreal feel captured. Like these scattered throughout the essay.

Lately my son and I have been a bit short with each other, and what I mean by short is that within thirty seconds of him entering a room, we both end up screaming at each other. So ironically the cell phone gives us the distance and space we need to be able to talk about things in a normal tone of voice. Of course, I have to get over the momentary panic coursing through my body when I initially see the call is from him fearing it is going to be about being arrested: but every now and then:
Ohmygod Dad, guess what.
What?
Guess who’s walking in front of me.
Who?
The Raiders’ head coach.
Raaaaaaideeeerrrss, I yell.
Raaaaaaideeeerrrss, he responds like some strange bonding ritual in which all acrimony is immediately forgiven and forgotten.
Ask him what the fuck, I excitedly implore.
What the fuck!, I hear him yell.
Then, realizing my son might actually accost the head coach of a National Football Team, I quickly decide to redirect with a more positive approach. Ah, the art of redirection; some toddler parenting skills you never forget, especially when they seem to also work so well with young adults.
Hey, wait; tell him, tell him that you still got faith.
Yeah, that’s a good one. Ok I’m gonna do it. Thanks, Dad.
Click and he hangs up before I have a chance to say, you’re welcome son, you’re welcome.

When I call my Middle Daughter she often asks why I sound so grumpy. And I am. It’s horrible but the explanation is simple. I blame the 45 second delay in each and every phone call as we try to establish who is speaking. It goes something like this, I call her and she answers:
Hello.
Zor-
What? Hello.
Zor-
Um, hello, hello!?
Zora list-
Uh, yeah well um hello?!
Repeat for at least 20 more seconds and by the time it actually all clears up I feel like grounding her. Instead, I take a deep breath in and, of course, as if the universe is testing to see if I am really breathing deeply enough, I usually hear one final: um, hello.

The realization that my children’s friends no longer have to interact with me as a parent. I think this make kids kinda creepy. Especially teenage boys. Both my daughters’ boy friends (note from The Kid Editor friends that are boys, not boyfriends) stand a house away when they “come over” and text that they’re here. So instead of having to knock on the door and be greeted by me, they sulk forty feet away and wait for them to come out.
What happened to showing a little courtesy, what happened to navigating the small talk, what happened to my chance to be the scary father interrogating hapless thirteen year olds? I want that chance.
Solution: Dad, my friend’s outside. Can I go play? My Middle Daughter shouts down from her lair upstairs.
I rush to look out the living room window, and sure enough at the corner of the house just out of sight stands a group of kids.
Ok, I yell, but let me walk you out.
Now my Middle Daughter is quick, but the speed with which she bounds down the stairs three at a time is impressive. I don’t think I’ve ever seen a child move faster, bolting out the door ahead of me, an audible trail of, it’s fine, Dad. I’ll be back in a few. Stay inside and relax.
Needless to say, I don’t.

I know it sounds horrible and manipulative, but in a fit of fear and distrust, I somehow informed my kids that when the bill comes I am able to read every text message they send and receive.
My Middle Daughter nods her head, her face full of trust and says, wow, really. Every one. That’s gotta be one hecka long bill. And simply goes back to whatever she is doing.
However, I begin to feel a burning sensation on the side of my head; it’s My Youngest staring at me. Finally she asks, Dad, can you see them if I delete them?
Immediately, I suspect something devious. I know I better be careful.
Why do you want to know?
No reason, and then as if on cue.
Buzz. Smile. Flip. Text. Flip. She looks back at me.
I’m just curious.
Somehow I feel outwitted.

My Middle Daughter pleaded to be allowed to go to her first high school party. Of course there were random text messages in the days leading up to the party. ‘You’re the best, dad.’ Two hours later. ‘So can I go?’ I’m such a sucker.
As she leaves for the party with a friend’s parent, I calmly state:
Now when I come to pick you up, I’ll call when I’m outside.
Ok, Dad, she utters pushing me away from the car window.
I decide to add, you know if you don’t answer the phone when I pull up though, I’m coming in to the house to find you.
Both her and her friend stop everything they are doing and stare at me horrified for what feels like 30 seconds. And then my Middle Daughter calmly states: don’t worry, Dad. Believe me, that’s one call I’m not gonna miss.

Driving my nineteen year old son, who is moving to NYC, to the airport, I joke with him about the things I’ll miss: yelling at him to turn down the music or picking up his soiled underwear off the bathroom floor.
We laugh and then he yells, shit!
What?
I forgot my cell phone charger at the house.
This was after we had to turn around twice already for things he forgot: his 600 hundred dollars he had stashed in a sock that he put into a bag of clothes to give to Goodwill as well as a third baseball hat he just had to have.
I, of course, want to say something about irresponsibility and how that’ll have to change as he’s on his own now, but instead I smile and say, well I guess you’ll have to just write me a letter then.
I will dad, I will. Or maybe I can get grandma to just buy me a charger.
And off he goes.
Good luck!
Addendum: it’s seems distance and cell phones do make the heart grow fonder; we’ve talked every other day.

As I hand My Youngest Daughter, my sweet, innocent eleven year old, her first cell phone, I am about to give her a little word to the wise.
Now remember, baby-
I know, Dad, I know, she interrupts.
What? I ask wondering what cute little thing she knows about owning a cell phone.
She looks me in the eye and says, no sexting. I’m only eleven, Dad, I don’t even have a boyfriend.
I almost drop the phone out of my hand, but manage to say, well, I was gonna say something abut not leaving your phone anywhere. But how do you know about sexting? I ask.
How do you, Dad?! Remember you’re forty, not twenty, gosh.
Posted by tomas, editor rad dad zine at 7:08 PM 4 comments: