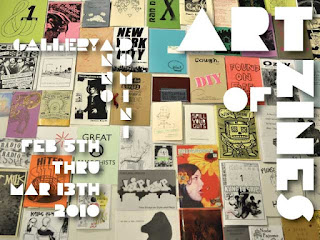 I'll have a table at this event.

Anno Domini // the second coming of Art & Design - 366 South First Street
Opening Reception: ART OF ZINES 2010 featuring hundreds of zines from basements, bedrooms and midnight copy shops througout the U.S. and abroad.
Opening Reception: First Friday February 5th, 8pm 'til late
Part of the South FIRST FRIDAYS art walk in downtown San Jose's SoFA District. Visit http://www.SouthFIRSTFRIDAYS.com for the full lineup.
We love zines… those little diy, cut-and-paste, copied-on-the-cheap, hand-folded, self-distributed gems that continue to surface because someone, somewhere feels the need to express themselves. It's that simple. Zines exist and fleurish outside the mainstream with no particular interest whether you're paying attention or not. According to Chip Rowe, creator of Chip's Closet Cleaner, "They're Tinkertoys for malcontents. They're obsessed with obsession. They're extraordinary and ordinary. They're about strangeness but since it's usually happening somewhere else you're kind of relieved."
Posted by tomas, editor rad dad zine at 3:23 PM

Anonymous said...
This comment has been removed by a blog administrator.
5:51 PM