So I’m watching the movie Baby Mama which I have to say was hella funny and horrifying at the same time. I was expecting though the requisite number of jokes about how pathetic fathers are but for the most part they weren’t there. In fact, at the end of the film there is this scene at which all three dads were there: one wearing a baby in a sling, all laughing with their child, nurturing their child. I was momentarily stunned. But, hey, times can change and even Hollywood comedies about parenthood can challenge (however weakly) some stereotypes. But it finally came: one dad does give his 1 yr old daughter a motorized pocket motorcycle. Yes, I laughed out loud.

However, this has been what I’ve been struggling with lately. How to challenge gender prescribed roles of fathering. How popular culture reinforces traditional gender roles about bad dads and their inept parenting abilities. And right about the time, Jennifer Margulis contacted me about reviewing the book The Baby Bonding Book for Dads.

Sure, I said. Anything that connects fathering to nurturing and babies, that equates men with the ability to offer support, to handle a crying baby, to discover themselves through the act of parenting, is something I want to support.

I eagerly agreed and waited for the book to arrive in the mail. When it did, I sat with my two youngest daughters and flipped through it. Of course the baby peeing in the air was wonderful, and we wondered how many times they tried to take that picture. My daughter a 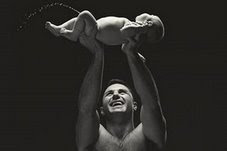 sked if the man got paid to get peed on. Good question? Yes, unfortunately some of my preteen bonding techniques involve really bad comedies like Baby Mama. And I wonder where my daughter gets her crude sense of humor? Hmmm.

But peeing aside, I like the book. I think any new father would appreciate a book so clearly based in loving your child, in the beauty and power of becoming a father..

I did have three concerns that are really issues I have with many of the parenting resources out there, issues, I’ll be honest, I have with my own project rad dad. My main concern is how the tone of the book seems to assume that the standard or normal fatherhood mentality is one grounded in patriarchally defined gendered roles. Somehow I want to think that today’s dads are beyond thinking that they have no real place in their kids’ lives until they are able to play ball. Do many men still equate cooking dinner for their kids as something too close to domesticity? Would most men really rather plop down in front of the TV, drink in hand, than go out for a hike? Don’t get me wrong; I’ll be the first one to act the fool during a big time Raiders game, but I’m not sure that I’d rather do that than spend quality time with my family and/or community. And I don’t think most men would either.

A smaller issue, but one that is important to me as a reader, is the voice of the narrative. I kinda wished they wrote as a mom and dad? I wanted to see the variations in the voices, to see them work things out on the page, back and forth between each other, as mom, as dad. Instead I felt the book had a slightly detached, impersonal tone to it, as if they were trying to speak to all parents rather than as parents.

I loved the all pictures (not just the peeing one), but as usual I wanted to see more diversity than the three or four pictures out of the thirty or so ones in the book. Too often it seems to me parenting is seen as a white experience when clearly and obviously it is not.

But having said those issues, I loved some of the things they say especially the idea of taking your baby with you everywhere you go. How often do women take their kids to errands, to work, to the store or bank. I love that they encourage fathers to do the same, to be seen publicly as fathers. We need to see that more often.

I love the notion 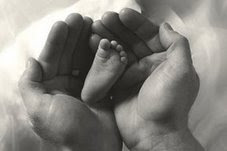 of getting naked with the baby. It is so true that nothing is as wonderful has skin on skin with your newborn.

And the recommendation to carry your baby in a sling. So true.

I can’t say enough about how important it is that the notion of discipline was absent from the book! Thank you.

Finally, the chapter on comforting was wonderful, was so important I wish it was even more prominent. Men can comfort, men can sooth, men can parent, even though yes sometimes they buy dumb presents that are more about them than their kids.

As a twenty one year old dad with a newborn, I would have loved this book. As a thirty seven year old, I’d love a book on how to bond with your seventeen year old child. When’s that one coming out?
Posted by tomas, editor rad dad zine at 10:34 PM

I really appreciate your comments, Tomas, especially the criticism, which I share, and the issues you say you also struggle with in your own project. The book does assume an audience used to the traditional dad role--but looking toward changing it. I think the current generation of dads are open to expanding their role, but aren't sure how they're going to do it, especially before the baby's born. And if they stay in the old-style dad role, letting the mom take the lead and keeping the baby a bit at arm's length, that distance will remain hard to close later. I've been amazed to see there are still guys I went to college with who have kids and have never even changed a diaper. Some dads really need to see how to get over the hump and get past their apprehension, get comfortable being a primary parent, instead of a back-up for the mom (or the disciplinarian--isn't it incredible that people are still talking about that old role!). I think we share a dedication to fatherhood that is more engaged than the traditional role, but most men aren't there yet--I wasn't before my wife got pregnant, and I think for a lot of men it's their baby's impending arrival that makes them think about doing things differently. In order to encourage them, we couldn't just talk from where we stand now--we had to reach out to where the audience is starting from, and walk with them in our direction.

Voice was another thing we struggled with. So much of what we read as parents is from and to moms, it's not very encouraging for dads. We wanted to address our audience, dads, mostly from a dad's point of view. But our writing voices are very different, and as we passed the chapters back and forth we ended up changing what the other had written for voice reasons, and blurring the voices somewhat. Putting in our separate voices as you suggest would have been more satisfying for us, but would have cut the dad-to-dad communication, which I think is an important way to talk to new dads. I still find the text to bounce from my distinct voice to my wife's, then into different degrees of merged voice, but she and I are probably the only ones to whom those differences are so clear. It would be great to do a different kind of book in which a mom and a dad wrote back and forth in a real conversation about parenting, each in their own voice, preserving and honoring the differences, working things out on the page like you suggest. I think that would be a refreshing book to read about parenting, the unprocessed realities, the way two different parents can be compliment and complete each other, and the way we evolve through the experience.

Hi! My fiancee, knowing that I'm a big zine guy and being a single male parent to my two daughters, gave me as a Christmas gift your Rad Dad #9 and #10. Well, I haven't read the others but what caught my attention is the part where you wrote about trying to start a magazine. To be honest, my first thought was wooooah!, this guy is too much of a fruitcake to try to go to a larger audience with this. I'm a pretty open-minded guy (I think!), but if you think a picture of a naked dude holding up naked peeing baby and writing about a man's skin upon a baby's skin as being beautiful and some BS comparison between a football game to community/family time...well, it seems to me you will only be preaching to the choir and thats probably not what you are aiming to do. Obviously, I support what you are doing to care enough to write to you, or maybe I have lived in the south too long and I am the one out of touch. Anywho, hopefully I gave you something to think about and good luck!